Why You Want an AK-47 for Home Defense

It may be a Russian design, but particularly since rifles in the AK-47 (also AK 47 or AK47) style have been made in the United States, it has become unofficially “America’s rifle” for many people. American Firearms calls the AK-47 “increasingly American,”  while the National Rifle Association calls it “the other black rifle,” a reference to the AR-15 and its designed-in-America pedigree.

The AK-47 may have gotten its start in Russia, but America has long-since claimed it. Fans of the AK-47 will tell you the rifle is incredibly sturdy and durable, that it can fire more than 20,000 rounds without any maintenance. People like the AK-47 because it’s fun to own, and fun to shoot. It’s easy to handle, with a bolt that’s easy to rack. Because it requires so little attention, it’s a great gun for both the truck and the home. The AK-47 is a workhorse rifle that offers great hit probability.

Even ardent fans of the AK-47 for home defense will tell you it’s probably not the best choice for a resident of a high-density apartment complex, but for many homeowners it’s a practical choice as well as an enjoyable one. 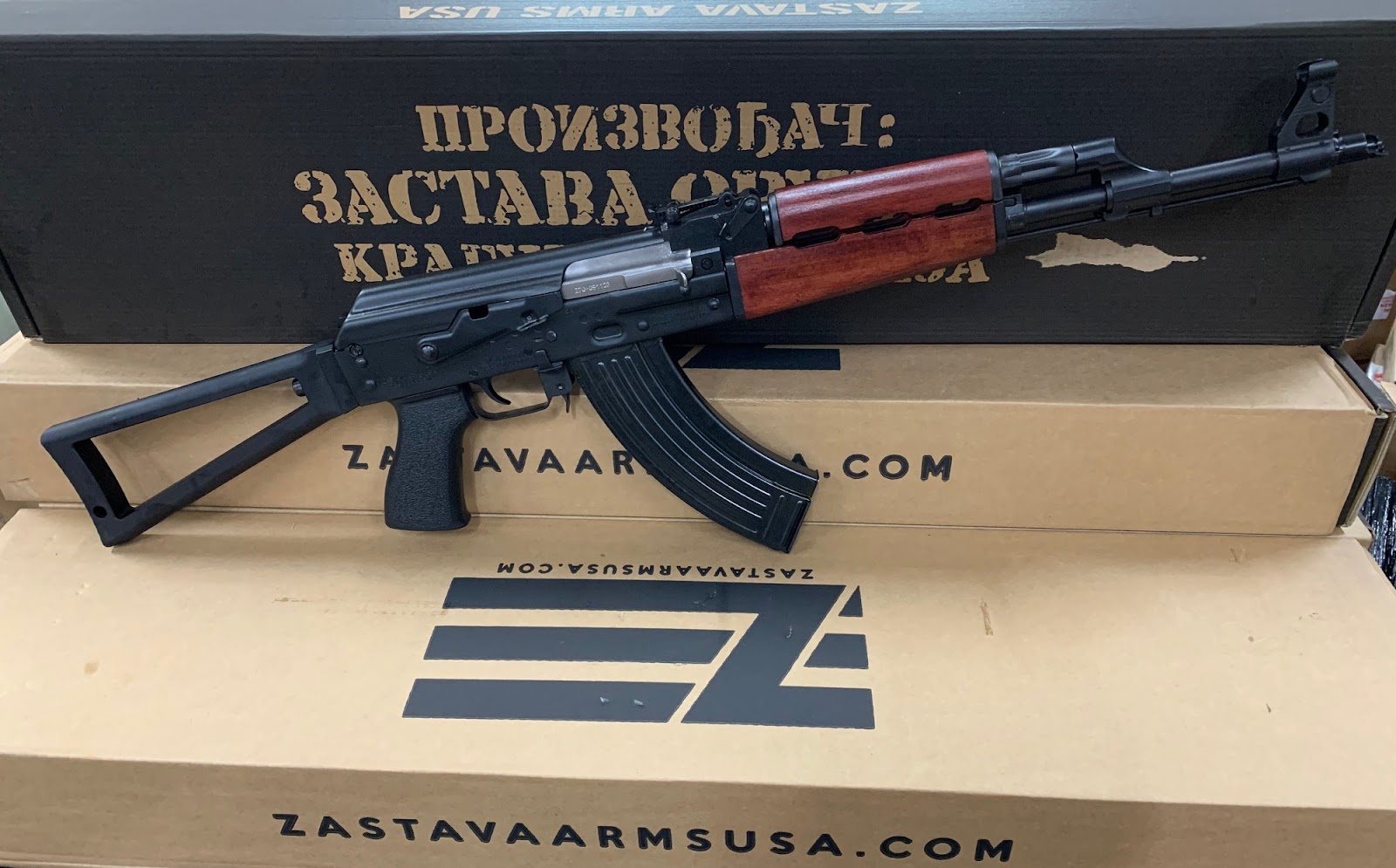 While there are now AK-47-style rifles at a wide range of price points, people like the AK-47 because it’s easy to find an American-made model that’s affordable, and some of the foreign-made models are quite cheap.

Before imports of the original Russian-built AK-47 were halted by economic sanctions in 2014, about 40 percent of all AK-47 civilian sales were imports to the American market. A year later, the first American-built AK-47s came off the assembly line, as Kalashnikov’s U.S. importer became the first American manufacturer of AK-47s. Originally using the slogan “Russian Heritage, American Innovation,” Kalashinikov USA (KUSA) now builds a broad lineup of rifles, shotguns and handguns in its Florida facility.

Since Mikhail Kalashnikov never secured a patent for the design of the AK-47, and the Soviet Union licensed it to both its Warsaw Pact allies and China, you can get an AK-47, or a virtually identical rifle, made any number of places. There are other American manufacturers, like Century Arms, and there are AK-47s made in Romania, Bulgaria, Israel, as well as this model built by Pioneer Arms in Poland. 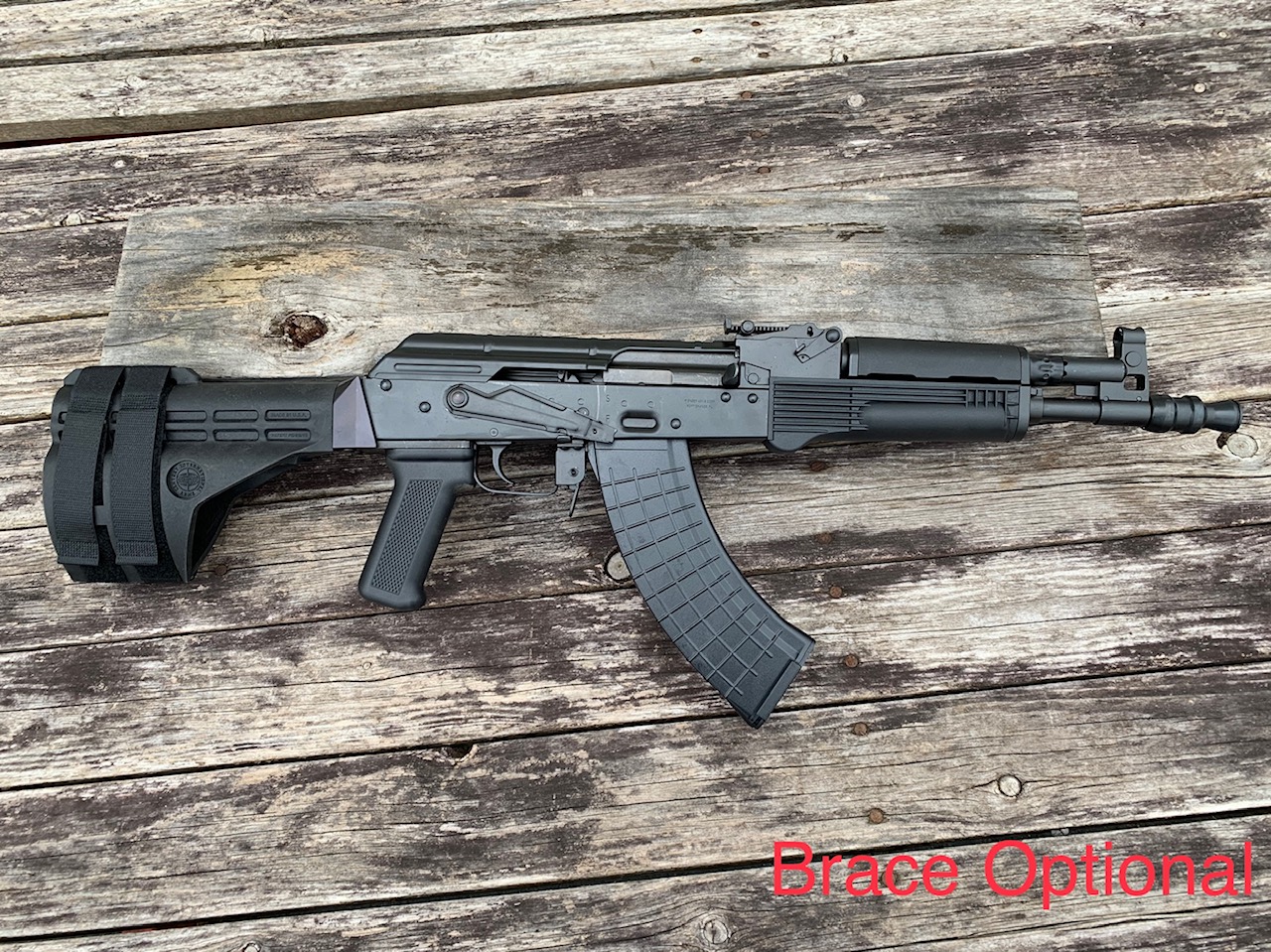 AK-47 Pistol with Brace (THE HELLPUP)

Overall, the AK-47 is a reliable rifle with good performance, even though its old reputation sometimes dogs it in some quarters. No doubt, 20 years ago there could be a wide range of quality among the AK-47s available in the U.S. at the time, but those issues have been worked out for a long time. Whether you buy from an American company or choose an imported model, almost every manufacturer of AK-47s delivers a much more consistent product with a solid warranty.

As with any kind of manufactured product, the finest of the AK-47s are the most expensive, while the less expensive imported models are most likely to be more cheaply made. At the very top of the AK-47 food chain are the models with milled receivers, made from solid blocks of steel, and $2,000 is not an unusual price for these weapons. But most AK-style rifles have stamped receivers, made from sheet metal. (If you are looking for a single tell-tale sign that an AK-47, it will be rivets in the receiver that have play or don’t sit flush with the receiver.) AK-47s with stamped receivers are considerably lighter and easy to maneuver for many shooters, so if you find the gun you like with the features and performance that serve you, the receiver is less important.

As a rule of thumb, the longer the barrel on a firearm, the higher the muzzle velocity, range and accuracy. For home defense or any close-quarters scenario, you’ll be in good shape with a shorter barrel, down to 16 inches (buying models with barrels shorter than 16 inches will involve a lot of extra red tape). If you need maximum range, you’ll need a barrel longer than 26 inches, but for home defense an AK-47 with a 16-inch barrel will give you plenty of accuracy and velocity, and are easy to acquire.

While you can find an AK-47-style rifle in several calibers, the classic AK rifle uses 7.62x39-caliber ammunition, typically with a 30-round magazine. For home defense you’ll want to use American-made ammunition, preferably expanding bullets.

If you’ve owned an AR rifle, you need to know the AK-47 is less modular, but manufacturers, particularly the American ones, are clear and comprehensive in detailing the compatibility of their models with secondary market parts.

One great value-priced AK-47 option (under $1,000) for home defense is the handsome Riley Defense AK-47 with its classic teak wood furniture, a black oxide finish and Bakelite pistol grip and a versatile 16.25-inch barrel. Another is the all-black Pioneer Arms Sporter AKM-47.

Toward the upper end of the market are models like the Yugoslavian Zastava M70 AK-47 (about $1,500) or the SAM75F imported from Bulgaria by Arsenal, the premier American importer of semi-automatic rifles, which runs more than $2,000. In addition to its receiver milled from a hot-die, hammer-forged blank, the SAM75F’s fine details include a chrome-lined hammer-forged barrel, a right-side folding tubular buttstock and an ambidextrous safety lever.

Your AK-47-style rifle can be as elaborate or as simple as you like. Your plain stock rifle will take care of business in your home, but there are dozens of practical upgrades available for your AK weapon, from scope rails and optic mounts to handguards and muzzle brakes.

The AK-47 and its kindred semi-automatic rifles are practical and effective for home defense and an affordable option to other semi-autos (like that other black rifle).

Shop All AK-47 on Gunprime.com